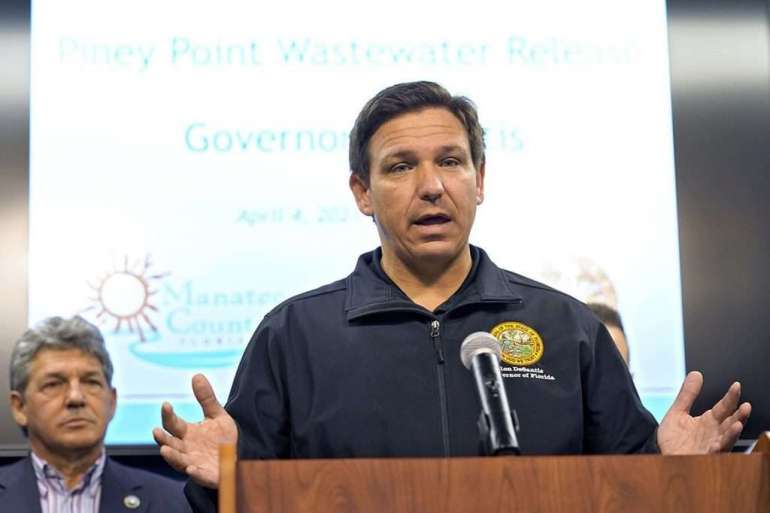 Florida’s anti-riot bill, among other things, created an appeal process to challenge local law enforcement budget cuts or modifications. Under that proposal, any appeal would go before an administration commission comprised of DeSantis and the Florida Cabinet. That panel could approve or deny the change and its decision is final.

During their Tuesday meeting, DeSantis and the Cabinet, seated as the commission, signed off on the specific rules that would govern the law enforcement budget appeal process. That decision sparked a brief fight as Agriculture Commissioner Nikki Fried, the panel’s lone Democrat and a 2022 challenger to DeSantis, objected to recommendations that Republican Attorney General Ashley Moody’s office publish a notice of the proposed rules, the next procedural step in the process.

The exchange was short, but DeSantis reemphasized that Florida would never “defund the police,” a slogan started by groups like Black Lives Matter that has become a rallying cry for some progressive groups pushing drastic police reform. “Defund the police,” however, has been cast as politically toxic by even some Democrats because it has handed Republicans an messaging tool that can be used to brand all Democrats as anti-law enforcement. The issue has led to clashes between progressive reformers and more establishment Democrats in the wake of the 2020 election cycle.

Fried was the lone member of the panel to oppose moving forward. She said her decision was tied to local control.

“We all support our law enforcement officers and the difficult job they do — but this is hypocritical interference with cities and counties managing their budgets and doing their jobs,” Fried said after the meeting.

In a news release from her office, Fried pointed out that when DeSantis kicked off his 2018 bid for governor, he said: “I reject the idea that government bureaucrats in a faraway capital could plan our lives better than we could plan them ourselves.”

The initial rules signed off on by the administration commission allow a county sheriff to file a budget appeal with the Administration Commission, which would prompt the governor’s office to hold a budget hearing. Findings from that hearing would then go back to the commission. The commission on Tuesday approved Moody to publish a notice of final rule, a process that could now go to a public hearing if one is requested.

The broader anti-riot legislation has sparked two federal lawsuits, including one in Tallahassee federal court filed by groups like the NAACP, others affiliated with Black Lives Matter, and the Dream Defenders.