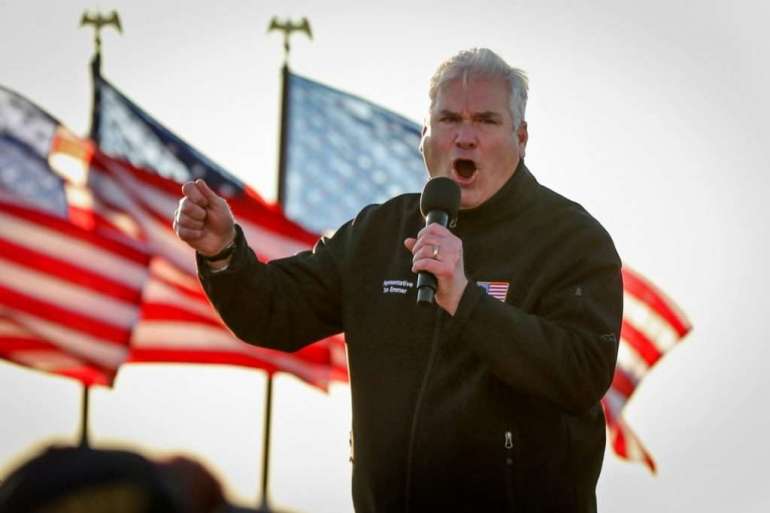 Then there’s Tina Forte, a long-shot GOP candidate seeking to unseat Rep. Alexandria Ocasio-Cortez (D-N.Y.), who posed for a picture the day of the attack wearing what appears to be black body armor. In another photo from that day, the right-wing influencer displayed a white power hand gesture.

Those candidates’ ties to the Jan. 6 attack are the latest headache — and in some cases, potential political liability — for House Republicans as they deal with fallout from the Trump-led rally that metastasized into a coup attempt. It’s impossible to know how many of the GOP’s still-growing crop of candidates this cycle took part in the riot. But Democrats are already preparing to lean into the issue of Trump-linked extremism within the Republican ranks, which they’re betting will hurt the GOP in key battleground districts next fall.

And a panel assembled by Speaker Nancy Pelosi, including two Republicans who voted to impeach Trump, is seeking to investigate the circumstances of the attack, an effort that could keep Jan. 6 in the public eye for months.

Speaking at a town hall last week, Rep. Tom Emmer of Minnesota — who leads the NRCC, the House GOP campaign arm — declined to say whether or not he would support “patriots” who attended the Jan. 6 rally.

“The beauty of this country is that anybody who wants to run for office can,” Emmer said in response to the question.

“I want as many people as possible who share our values to step up and be the voice and run for office,” the National Republican Congressional Committee chair said in a recording obtained by POLITICO and first reported by HuffPost.

NRCC spokesperson Michael McAdams later added: “Chairman Emmer has made it clear — and still believes — anyone who broke the law needs to be held accountable … Unlike Democrats, we believe the voters will ultimately make these decisions, not dictators in Washington.”

Many Republicans on Capitol Hill are eager to move on from Jan. 6, particularly when it comes to the involvement of the former president. Many have accused Democrats of relitigating the riot for political gain, particularly after a recent survey from the House Democrats’ campaign arm, the DCCC, found that nearly six in 10 battleground voters had serious doubts about House GOP candidates. That result came after pollsters told respondents that the party “helped spread lies” about the winner of the presidential election and “encouraged” the mob at the Capitol.

“It is clear that Republicans are committed to appealing to the extremism that led to the January 6 insurrection, and unfortunately for them, a majority of Americans reject that extremism and support democracy,” Taylor added, while labeling House Minority Leader Kevin McCarthy and Emmer as “extremist ringleaders.”

No matter how much most GOP lawmakers would prefer to not talk about Jan. 6, they remain closely tethered to the former president who headlined the pre-riot rally. Many House Republicans have sought Trump’s endorsement, visited his resorts for fundraisers, and invited him on trips to spotlight various issues.

That closeness matters in the midterms because Trump has also started to publicly revise the history of the riot, describing those involved as a “loving crowd” — glossing over the fact that police officers were stabbed with sharpened flag poles, covered with bear spray and otherwise pummeled by some in the crowd seeking to stop certification of his loss.

While GOP lawmakers have condemned the violence, with some criticizing Trump directly for his role in encouraging the crowd, the party’s candidates who attended the Jan. 6 rally are already being forced to explain their attendance.

Van Orden — a prized GOP recruit from the 2020 cycle who nearly defeated incumbent Democrat Ron Kind — has sought to distance himself from the riot.

“When it became clear that a protest had become a mob, I left the area as to remain there could be construed as tacitly approving this unlawful conduct,” Van Orden wrote in an Op-ed for a local paper, the La Crosse Tribune, explaining why he had been outside the Capitol that day.

But his exact whereabouts were disputed after a Daily Beast report revealed Van Orden appeared to be in a restricted area of the Capitol in a photo he posted to Facebook. Still, the former Navy SEAL said he categorically denounces the violence of Jan. 6.

In contrast, Daniels — a lower-tier GOP candidate who failed to advance in a primary against Rep. Matt Cartwright (D-Pa.) last fall — posted about his attendance at the Capitol after rioters stormed the building. Daniels weighed in on social media to praise Rep. Lauren Boebert (R-Colo.) for her speech about choosing not to certify Joe Biden’s election win after the insurrection was quelled.

Daniels has also amplified social media accounts that have attacked law enforcement officers who testified about defending the Capitol on Jan. 6.

Forte, one of the GOP’s most inflammatory candidates with a tie to Jan. 6, has perhaps the longest odds in her race to defeat Ocasio-Cortez.

The Republican posted various videos and photos to her social media accounts that appear to show her at the Capitol during the assault. The same day of the attack, she told a Newsmax host: “This is our house, and we have the right to be here,” according to a report by Slate.

Van Orden, Daniels and Forte did not respond to interview requests.

The trio of GOP candidates’ connections to Jan. 6 are not yet publicly well-known. Still, House Republicans are certain to face questions about them as the midterms approach. Republicans are maintaining their position that anyone who broke the law should be held responsible.

“At this point, if you were known to participate in violence at the Capitol on Jan. 6, you have probably been arrested,” said Rep. Jim Banks (R-Ind.), who spoke broadly and declined to comment specifically on candidates he isn’t familiar with. “If you’ve broken the law, if you did something to break the law, you should be arrested.”

Otherwise, Banks deferred to Emmer and said voters should decide on candidates who were in the vicinity of the riot.

For Republican voters, a presence at Jan. 6 could be a selling point. In an era when fealty to the former president is one of — if not the — most animating issue in a GOP primary, attendance at an event meant to soothe Trump’s ego can be a powerful way for a candidate to signal loyalty.

And in deep-red seats, candidates don’t have to sweat the electoral ramifications. Candidates in Wyoming’s at-large seat, where Trump is on a crusade to unite the party behind a candidate to oust Rep. Liz Cheney (R-Wyo.), have been openly bragging about their attempts to support Trump’s baseless challenge to the 2020 election.

One Cheney challenger, state Rep. Chuck Gray, frequently mentions that he went to Arizona to boost the Maricopa County audit; another, attorney Darin Smith, has touted his Washington, D.C. visit on Jan. 6 (though he said he did not go in the Capitol building or past any police barricades). Trump interviewed both ahead of a potential endorsement in the race.

“Donald Trump, he asked us, he said: ‘Hey, come to the Capitol come and demand a fair and audited election, exercise your constitutional rights,” Smith said. “And so that’s exactly what I did.”