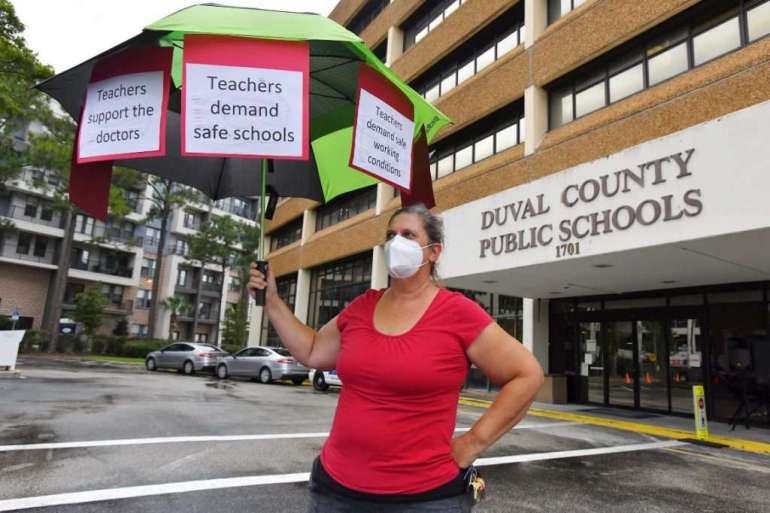 “As controversial as it may be, I absolutely believe this is the right thing to do temporarily until we have a better understanding of the Delta variant and the impact it has on school-aged children,” said Leon County Superintendent Rocky Hanna on Wednesday.

The state Department of Health reported 10,785 new Covid-19 infections in children under 12 years old between July 23 and 29, while more than 11,500 hospitalizations were reported Tuesday by the U.S. Department of Health and Human Services. The Centers for Disease Control and Prevention said that Florida saw more than 50,000 new infections and 100 deaths over a recent three-day span. Florida now makes up roughly one in five new infections in America.

Amid this spike, school districts across the state are attempting to craft new rules to keep kids safe while also following DeSantis’ orders. In Duval County, school officials voted Tuesday to make masks mandatory for students — with the caveat that parents can opt out of it.

“School districts will be expected to allow parents to make this choice,” she said.

Many other Florida school districts are requiring masks for teachers, visitors and vendors on campuses. But Alachua, Leon and Broward are among the first to push for masking students despite DeSantis’ order. School leaders acknowledged that implementing mandatory mask rules at the behest of DeSantis and Education Commissioner Richard Corcoran could ultimately hurt them financially if the state fights back.

In Alachua, school officials see it as a matter of life or death. Besides the two janitors who died, the school district is dealing with 15 positive Covid-19 cases, with classes days away from starting, Carlee Simon, the local school superintendent, said Tuesday.

Alachua’s school board, which represents some 28,000 students around the Gainseville area, is expected to reexamine its district-wide mask requirement on Aug. 17.

“We’re running into a situation where we are literally losing our workforce,” Simon said.