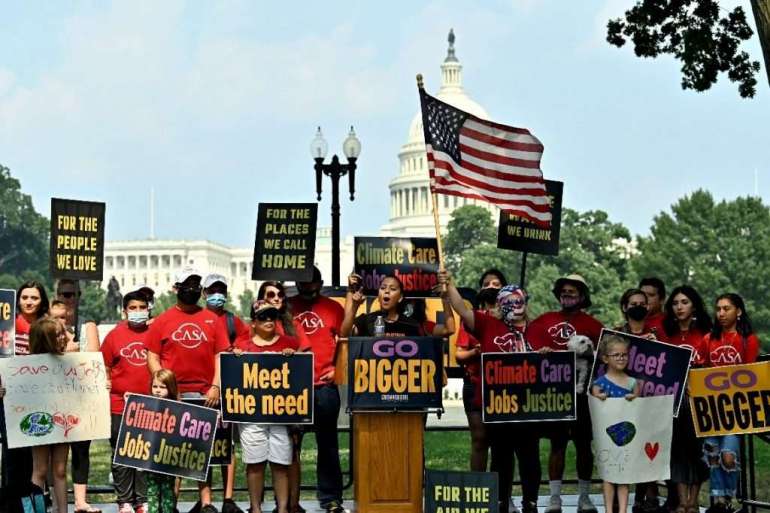 Unlike their House colleagues, liberal senators are refraining from publicly criticizing their centrist counterparts, even though both Sens. Kyrsten Sinema (D-Ariz.) and Joe Manchin (D-W.Va.) have raised serious concerns with the $3.5 trillion number. Senate Budget Committee Chair Bernie Sanders (I-Vt) Thursday evening reiterated that there would be “no infrastructure bill without the $3.5 trillion reconciliation bill” in response to an op-ed from the West Virginia Democrat about the bill, but did not mention Manchin by name.

Even so, House Democrats could end up picking the fight by opposing the bipartisan infrastructure measure this month if the social spending bill isn’t done. That’s exactly what one prominent outside group, Indivisible, is steeling their spines for.

“This is a moment when we see a crucial role for grassroots pressure that makes clear that activists understand these two vehicles are linked,” said Leah Greenberg, co-executive director of Indivisible. “We need to push Democrats on what they’re doing to ensure that the broader transformational agenda gets enacted, not just this relatively limited infrastructure package.”

Such an infrastructure bill blockade by House Democrats this month would almost surely be temporary, but it’s an outcome party leaders are keen to avoid. That’s why the stakes of the coming fight on Capitol Hill couldn’t be higher for Democrats as they jostle over the size and substance of a social spending package that’s set to define the domestic agenda of President Joe Biden.

“Democrats have all voted to take this package forward at $3.5 trillion,” Sen. Elizabeth Warren (D-Mass.) said when asked about hesitance from moderates. “Raising $3.5 trillion is not hard if we’re willing to advance our progressive values. There’s a lot of money available if we make billionaires and giant corporations pay their fair share, and if we fund the IRS so that tax cheats have to cough up what they owe.”

As progressives push to ensure that provisions on child care, climate change, the tax code and immigration make it into the final product, they’re nudging moderates to elaborate on their policy concerns with the social spending package. Sinema has said she supports “many of the goals” it aims to tackle, even as her spokesperson underscored that she will not support legislation that costs $3.5 trillion.

And Manchin used a Wall Street Journal op-ed Thursday to urge fellow Democrats to hit pause on the bill. He suggested he might endorse a scaled-back social spending measure but threw cold water on a $3.5 trillion top line.

“If people have criticisms, which they are allowed to have of course, you’ve got to get specific,” said Faiz Shakir, a senior adviser to Sanders, who last month traveled to Indiana and Iowa to talk about the social spending bill. “You can’t have a general anxiety about this thing or that thing … I want to hear what it is specifically so that we can debate it rather than floating above it.”

A Sinema spokesperson said that the Arizonan is not expected to weigh in on specific policies until the bill’s text is finalized.

In addition to Indivisible, liberal groups like the Working Families Party are planning to target the 10 House Democratic moderates who insisted that they would not support the social spending plan until House leadership committed to the September 27 vote. Natalia Salgado, director of federal affairs for the Working Families Party, said that the group would knock on doors, publish op-eds, hold virtual town halls in the members’ districts, purchase six-figure ad buys and mount local media blitzes. The organization is also speaking with potential 2022 primary challengers in some of the Democrats’ districts.

“In places where it is a solid blue district, we need people there who elected these folks to Congress to know to come together and be informed about how their representative is usurping their ability to get what they need,” Salgado said. “We’re definitely going to be jumping in some of these races to be able to challenge some of these ten.”

In addition to events and ads, progressives are trying to increase momentum for the package through polling. Real Recovery Now!, a coalition of progressive and labor groups, plans to release polls in mid-September from 12 states on the package’s provisions, according to a spokesperson.

The outside-group push for the social spending package comes as Biden sees the lowest approval rating of his presidency and faces criticism from his own party over his handling of the Afghanistan exit. But Democrats view this fall’s multitrillion-dollar bill as their final major opportunity to deliver on their promises and their best chance at convincing voters to keep them in power next year, despite Republicans already attacking the legislation as a “reckless taxing and spending spree,” in the words of Senate Minority Leader Mitch McConnell.

Even the all-hands-on-deck effort, though, might not be enough to overcome sky-high expectations the party has set on timing. Democrats are beginning to openly acknowledge that passing the social spending plan by the end of September would be a stretch. They need to ensure the sweeping legislation meets the procedural requirements for the budget reconciliation process that allows them to sidestep a filibuster and pass the bill without Republican votes.

And some portions of the party-line measure, like providing a pathway to citizenship for undocumented workers, may not pass muster with the Senate parliamentarian.

“There’s a long list of priorities and investments we want to make. It’s just going to take a while,” said Sen. Bob Casey (D-Pa.), who is focused on the home and community-based services element of the bill. He added that the $3.5 trillion top line could change but that he didn’t foresee specific policies getting scrapped entirely. Instead, he suggested that the duration or funding for an individual provision could be altered.

“We’re trying to get agreement between and among all 50 of us, and that presents some challenges,” Casey said. “As much as I thought we’d be done in September, I would guess we wouldn’t.”

When asked if Democrats would meet the Sept. 15 deadline to finish writing the bill, Warren and Casey both replied: “I sure hope so.”