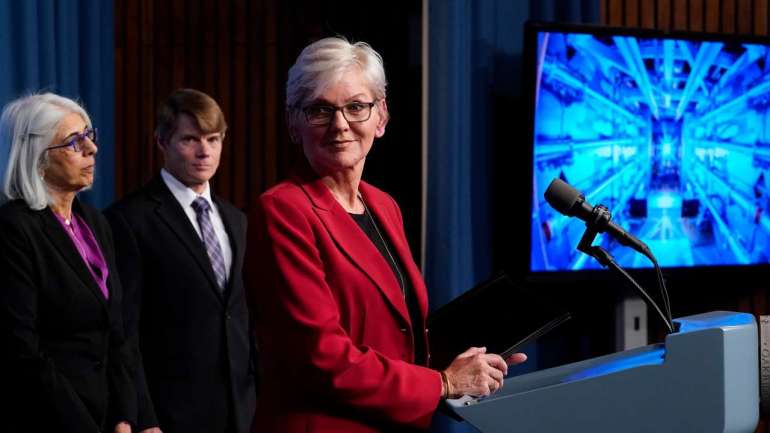 Lab lasers had triggered fusion reactions before. But this time, the scientists managed to keep the reaction going long enough to produce three megajoules of energy, more than the two megajoules the lasers had deposited, NNSA Deputy Administrator for Defense Programs Marvin Adams said at the event.

The whole reaction took less time than it takes light to travel one inch, Adams added. But that was enough to prove for the first time that it was possible to mash together atoms and release a greater amount of energy than was used to trigger the reaction.

Livermore focuses its efforts on research to maintain the U.S. nuclear weapon fleet. But this experiment also has tremendous implications for the country’s power supply, albeit one that would still be decades in the making.

Fusion energy has long been a dream for scientists who say the technology will enable cheap, plentiful power that does not produce the planet-heating gases or pollution that come with burning fossil fuels. And it would not leave behind the piles of radioactive waste that the fleet of current fission reactors produce — and whose disposal has vexed Washington for decades.

The achievement was greeted with a wave of excitement — as well as calls for patience. Tuesday’s announcement was the product of decades worth of research, which often seemed at the cusp of a breakthrough that remained frustratingly out of reach.

“Just getting above one [in energy] net out is a milestone,” Paul Dabbar, a former DOE Undersecretary of Science who oversaw the National Labs fusion program, said in an interview. “Being able to contain fusion and get net energy out that we just accomplished, that was the biggest of the challenges” facing the idea of nuclear fusion becoming a widespread technology. “But believe me, there are still plenty of others.”

But as significant as the new achievement is, scientists say it will take decades — and hundreds of billions of dollars — to reach a point where the technology can be deployed commercially.

Livermore Lab Director Kimberly S. Budil said commercialization would still take “a few decades,” but was “moving to the foreground.”

“There’s very significant hurdles, not just in the science, but in the technology,” Budil said.

The new breakthrough will give researchers and companies that are pouring money and effort into that science a new boost of confidence.

Rep. Eric Swalwell, a California Democrat who represents the district that’s home to Livermore, said he thought the announcement would help spur a greater public investment in the project.

“It should lead to an increase so they can upgrade the technologies they use to apply the laser,’’ said Swalwell, who attended the event. “Also, I hope it’s a recruiting boom as well. A lot of young physicists will see this as an opportunity to work on the energy source of the future.”

The subject of new workers entering the National Labs program caused one of the biggest reactions of the event, when Adams’ on-stage comment, “We’re hiring,” spurred a long round of applause from the crowd.

“It can unlock and solve the energy challenges the whole world faces,” he said. “It’s still a ways away but there is an awful lot of work being done and every country sees the value and importance of it. Because the conventional energy sources we have and also the new technologies in development we’re doing, this unlocks it all.”

Republicans also generally reacted positively to the DOE’s news although it’s unclear whether that initial response will translate to more dollars to support further technological advancements.

“We’ve heard it’s always going to come, but it never does,” he said. “This could be it. I’m very interested in following it and I hope it’s real.”

But Sen. Jim Risch of Idaho, ranking member of the Foreign Relations Committee, is skeptical.

“This isn’t the first time we’ve had announcements like this,” he said. “Fusion is the unicorn everybody chases. Some day, somebody will catch the unicorn.”

Sen. John Hoeven (R-N.D.), who serves on the Energy Committee, said although the information is preliminary, “the idea they can produce more energy than is expended in creating the fusion is amazing,” and indicated he could be open to supporting more research & development spending.

“If in fact this is truly fusion and we can see it becoming commercially viable in terms of how we do it and what kind of funding it takes to get there, I would certainly look at that.”

“It’s a breakthrough,” she said. “When we are subsidizing wind and solar which Democrats and the administration consider to be the preferred renewable, we are not investing the dollars, time and energy into other things that may be the future energy source we all want.”

“There are a lot of private individuals putting a lot of money into research — literally billions of dollars,” Holt said.

Much of that money, he said, was focused on “real long shots.”

Josh Siegel contributed to this report.