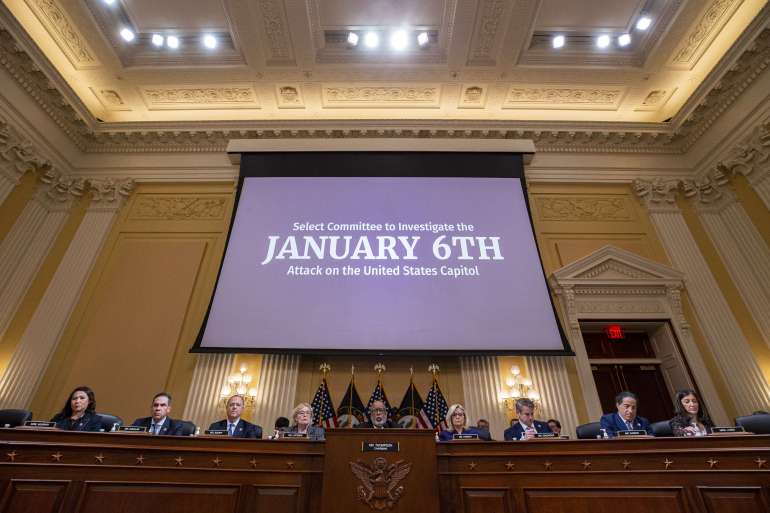 Here’s a look at some of the most extraordinary and important evidence in the select committee’s files.

“He does do his own tweets”

Jan. 6 investigators have pored over the circumstances of Trump’s Dec. 19, 2020 tweet exhorting followers to come to Washington to protest the counting of electoral votes by Congress. “Will be wild,” Trump wrote, a message that experts and security officials viewed as rocket fuel for extremists.

The committee’s evidence includes a Jan. 22, 2021 text exchange between Trump adviser Katrina Pierson and his longtime social media guru Dan Scavino in which Scavino makes clear: No one told Trump to author the tweet. Scavino rejected the notion that advocates involved in “Stop the Steal” efforts had anything to do with Trump’s decision to issue the tweet. And in what appears to be a nod to its authorship, Scavino wrote “He does do his own tweets.”

Scavino was an elusive witness for the select committee, and the House voted to hold him in contempt for refusing to cooperate, but the Justice Department declined to prosecute him.

Two days after the Jan. 6 attack, Trump adviser Steve Bannon told his spokeswoman that he didn’t necessarily think the fight to prevent a Biden administration had ended.

In an interview with Bannon’s spokesperson Alexandra Preate, the select committee read from a text exchange Preate had with Bannon on Jan. 8, 2021.

“We must turn up the heat,” Bannon wrote to Preate.

When Preate asked when Trump was leaving town ahead of Biden’s inauguration, Bannon replied, “He’s not staying in the White House after the 20th. But who says we don’t have one million people the next day?”

The Jan. 2 call log denotes Trump’s hour-long call with Georgia Secretary of State Brad Raffensperger, in which Trump famously urged him to “find” enough votes to flip the election results to him. The logs put that call in context: Immediately afterward, Trump had a Zoom meeting with attorney Rudy Giuliani, a phone call with Chief of Staff Mark Meadows and a 22-minute call with Bannon.

On Jan. 3, Trump’s call logs reflect a flurry of contacts with top Justice Department officials as he contemplated elevating Jeffrey Clark to acting attorney general — a figure he viewed as sympathetic to his bid to stay in power. Trump spoke to Rep. Scott Perry (R-Pa.) that afternoon just before the call logs reflect Clark actually being elevated, however briefly, to the top DOJ post. But the move didn’t hold. A mass resignation threat by DOJ leaders prompted Trump to back away from the plan.

Sen. Mike Lee (R-Utah) strategized with Trump attorney Cleta Mitchell about her effort to help the campaign promote the notion that the 2020 election was tainted by fraud and irregularities. But Lee repeatedly pressed Mitchell on the “slippery slope” he said her arguments entailed.

“Jan. 6 is a dangerous idea,” Lee said, in a message exchange with Mitchell that she provided to the select committee. “Not just for the republic itself, but also for the president.”

Lee lamented that no court or state authority had backed Trump’s effort, so he didn’t view Congress as an appropriate backstop.

“I had somehow thought you and I agreed that we’d need something like a judgment from a court of competent jurisdiction or a decision by a state legislature,” Lee wrote.

“That was back when I believed we would get a day in court,” Mitchell replied.

The two discussed a strategy to have friendly GOP senators hold election-related public hearings. Lee initially said he viewed it as a way to put an end to Jan. 6 challenges altogether — give Trump and his supporters a venue to air their frustrations without lodging actual election challenges. But Mitchell said she viewed the hearings as a prelude to the Jan. 6 challenges.

“We need to make a record,” she said, adding that she had discussed the strategy with Meadows.

Lee noted that the matters could be handled by Sen. Lindsey Graham’s Judiciary Committee or Sen. Ron Johnson’s Homeland Security Committee. But Mitchell said she viewed Johnson as a “loose cannon.”

Trump aide Hope Hicks texted with Ivanka Trump’s chief of staff Julie Radford on the afternoon of Jan. 6 decrying Trump’s actions and lamenting that their careers were likely doomed.

“All of us that didn’t have jobs lined up will be perpetually unemployed. I’m so mad and upset,” Hicks wrote. “We all look like domestic terrorists now.”

“Oh yes I’ve been crying for an hour,” Radford replied.

“Not being dramatic but looks like we are all fucked,” Hicks continued. “Alyssa looks like a genius.”

Hicks’ message was an apparent reference to Alyssa Farah, a former Trump White House aide who departed the administration weeks before Jan. 6.

Turning back to Trump, Hicks expressed outrage about his attack on Vice President Mike Pence in the midst of the violence. “Wtf is wrong with him?” she wrote.

The select committee’s evidence includes a version of Trump’s Jan. 6 rally speech that shows how much he deviated from the written text and ad-libbed some of his most incendiary lines.

A group of Trump-aligned lawyers including John Eastman, William Olson and Kris Kobach spent the days before Christmas 2020 debating whether to file a lawsuit against Mike Pence, an effort to force his hand and convince a judge to declare Pence had the authority to reject Biden’s electoral votes.

That lawsuit would eventually be filed by Rep. Louie Gohmert (R-Texas) and some of Trump’s GOP allies like Arizona GOP chair Kelli Ward in a Texas-based federal court. But initially the Trump lawyers worried that filing the suit in D.C. — a more natural venue — would face near certain defeat or worse: a ruling that Pence was required to count the electoral votes in Biden’s favor. Their initial instinct, when attorney Larry Joseph sent a draft of the complaint to the group on Dec. 22, 2020, was that he not file it yet.

“I apologize for being so blunt, as we all are operating under pressure, but strategically although this complaint could be a home run, but more likely a disaster, as it could completely tank the January 6 strategy if it resulted in a judicial determination in the District in which the Congress will meet that Pence is constrained [by the Electoral Count Act],” Olson wrote.

Olson put the odds of success in D.C. federal courts at 10 percent. But Eastman went further.

“I put the odds at winning in either [D.C. federal district or appeals courts] closer to zero, and the risk of getting a court ruling that Pence has no authority to reject the Biden-certified ballots very high,” Eastman replied. “And danger that SCOTUS will decline to take as well. Best we could hope for, then, is a dismissal as non-justiciable.”

Gohmert’s suit was filed on Dec. 27 in the Eastern District of Texas and was dismissed by a judge there and by an appeals court panel.

Trump wanted to walk to the Capitol

The select committee also posted a journal entry produced by Kayleigh McEnany, the Trump White House press Secretary, from Jan. 6, describing some of the chaos and interactions she observed that day.

She described efforts to craft tweets with Trump responding to the violence at the Capitol, a call from Lindsey Graham worried about reports that the National Guard had been delayed, and noted Trump looked at the TV while Biden was delivering remarks on the attack.

“Biden calls for him to speak literally as potus filming,” she wrote.

McEnany wrote that as they prepared Trump’s video address, they made sure to have Trump tell rioters to “go home.” “Important part of message,” she wrote.

Gen. Charles Flynn told the Jan. 6 select committee that he doesn’t share his brother Michael Flynn’s extreme view about the use of “martial law” to seize voting machines or involve the military in Donald Trump’s effort to remain in power.

“Congresswoman, my brother’s politics are his own, not mine,” Flynn said amid questioning by Rep. Liz Cheney (R-Wyo.), vice chair of the committee.

Charles Flynn was briefly present during a phone call amid the Jan. 6 violence with Capitol Police Chief Steven Sund and other security officials as they discussed deployment of the National Guard.

Mark Milley, the chairman of the Joint Chiefs of Staff, put a finer point on it, telling the select committee that Michael Flynn’s words crossed lines that could warrant punishment, though he stopped short of advocating for it.

Milley’s 300-page interview transcript is jammed with some of the most explosive news of the Jan. 6 committee’s entire investigation. In one exchange, also about Flynn, he said he had to dissuade Trump administration figures from a suggestion that retired military officers who wrote op-eds critical of Trump should be recalled and court-martialed.

“I advised them not to do that,” Milley said.

Milley also said he had post-election conversations with senior figures in the Trump administration, including Secretary of State Mike Pompeo, Lt. Gen. Keith Kellogg and Meadows in which all uniformly described Trump as being in a “dark place” because of his defeat.

Milley also said he had dozens of calls with foreign counterparts after the Nov. 3, 2020 election to reassure them of America’s stability, despite appearances.

At the outset of his interview with the select committee, Milley said he had gone to extraordinary lengths to collect and protect a “boatload” of documents he said he anticipated would be relevant to future investigations.

“I knew the significance, and I asked my staff, freeze all your records, collate them, get them collected up,” he said.

Later in the interview, he added another detail: after the documents were gathered, Milley said he classified it all “at a pretty high level” to ensure only “appropriate” people saw it. He said most of it could be unclassified and shared with lawmakers and staff.