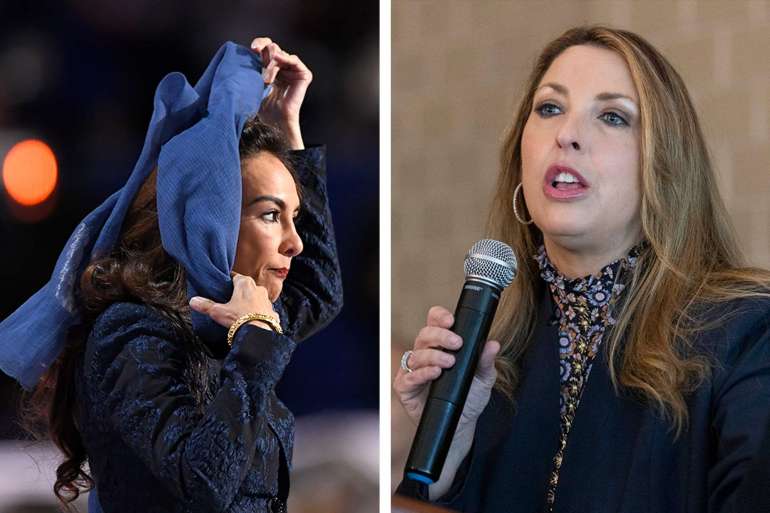 “We just can’t afford to take our foot off the gas,” McDaniel said, projecting confidence she would prevail over Dhillon.

Dhillon, meanwhile, asserted that with stronger leadership, Republicans “might have won bigger in the 2022 election, and we would be ready to win in 2024.”

Friday’s election among the 168 RNC members will follow two days of meet-and-greets, debates and glad-handing among the other typical party business. Measured by public statements of support, McDaniel would appear safe: She has more than 100 members publicly backing her, while Dhillon has fewer than 30. (MyPillow CEO Mike Lindell is also running, but few RNC members take him seriously.)

But the bitter tenor of the fight, the enormous stakes for the GOP going into the 2024 elections and the uncertainty of a secret-ballot election have elevated the contest into a political battle royale.

Dhillon on Monday emailed her latest pitch to RNC members — pledging to make changes that include moving her family from California to Washington (McDaniel commutes from Michigan), banning “extremely loud entertainment” at committee events, and maintaining a “culture of collegiality and cooperation” inside the party.

In the subsequent interview, Dhillon went chapter-and-verse on the failings she sees under McDaniel: The RNC has overspent on consultants and “frivolous expenditures that don’t win elections.” It has fallen behind Democrats in encouraging voting before Election Day and making sure as many of its voters’ ballots are counted as possible. And, she argued, the party “whiffed” in shaping the GOP’s midterm message — arguing that the RNC has to lead, not follow, when the party is out of power.

McDaniel rejected the accusations that the RNC fumbled the midterms, arguing that her efforts to build the party infrastructure “made it a better election than it would have otherwise been” and that Dhillon and her other critics simply “don’t understand what the RNC’s job actually is.”

“The infrastructure we built made it so a Republican could get to the finish line,” she said, noting that more than 4 million more GOP voters turned out nationwide than Democrats. “But the difference between why one Republican did and didn’t is down to the campaign, the candidate and messaging, which the RNC does not have control over.”

Dhillon said losing Republican candidates such as Arizona’s Kari Lake, Pennsylvania’s Mehmet Oz and Georgia’s Herschel Walker were no more flawed than the Democrats who beat them. Republicans just have to get as “efficient” as Democrats, she said, at turning out their voters and making sure their ballots are counted.

“John Fetterman could not even speak and articulate for himself during much of his campaign, and he got elected,” she said, referring to the new Pennsylvania senator, who suffered a stroke mid-campaign. “So I disagree with that explanation.”

Hanging over the contest is the shadow of former president Donald Trump, who has ties to both candidates but has not made an endorsement in the race.

Dhillon and McDaniel have this in common: Neither was eager to finger Trump for the GOP’s recent electoral failings — including his role in actively discouraging Republican voters from casting mail ballots or elevating several of the cycle’s most disappointing candidates.

But Dhillon is seeking to walk a fine line as she maintains a coalition of MAGA die-hards and Never Trumpers who share an interest in ousting McDaniel. It’s meant assuming some new and nuanced positions for an attorney who, after the 2020 election, cheered Rudy Giuliani’s suggestion that he found cause to overturn Pennsylvania’s results, solicited donations for Trump’s election defense fund on Twitter, and wrote an op-ed on Townhall.com entitled “Republican lawyers are fighting to stop the steal.”

Yet in the interview, Dhillon rejected Trump’s claims of a stolen 2020 election and confirmed Joe Biden as the rightful winner. She noted that she did not personally file or litigate any of the lawsuits filed by Trump allies seeking to challenge the election.

“The time to ensure the integrity of an election is before the election,” she said. “And if you haven’t prepared for that, don’t start scrambling and hiring lawyers after the fact. It’s too late.”

McDaniel, meanwhile, faces blowback from Trump skeptics who argue she doesn’t push back on Trump enough. In an email to RNC members first reported by the Washington Post, Tennessee committeeman Oscar Brock wrote that “the reality is that every time Donald Trump says jump, Ronna asks, ‘How high?’”

McDaniel has responded by pledging repeatedly to keep the 2024 primary process neutral and promising to bridge divisions inside the party. “I’m running a unity campaign, and part of that is, as party chair, not attacking other Republicans,” she said.

But Dhillon said some Republicans have told her they are already skeptical of McDaniel’s assurances, given that she tapped Trump loyalist David Bossie to run the 2024 GOP debates. McDaniel’s backers, meanwhile, have privately raised doubts about what the RNC would look like under Dhillon, who has suggested she will hire MAGA hardliners to run the organization.

The whisper campaigns have been relentless, and they have been accompanied by an effort to whip up a grassroots uprising on Dhillon’s behalf — prompting McDaniel to denounce some of the scorched-earth tactics.

One Dhillon ally published RNC members’ contact information, encouraging GOP voters to hound them to oppose McDaniel, while Kirk, a MAGA activist with a massive following, threatened in an email to RNC members last month to replace them with activists who “better represent the grassroots voice.”

“It’s intentionally inflaming passions based on things that aren’t true,” McDaniel said, warning that the nastiness bodes ill for 2024, “with Republicans attacking other Republicans to the point that we can’t come together after.”

Dhillon rejected McDaniel’s suggestion that her longshot campaign is unnecessarily dividing the party ahead of a critical presidential election. “This is not personal,” she said. “You have to point out the reasons for change. I try to do that as persuasively and civilly as possible.”

While the arithmetic appears formidable for Dhillon, she insisted still has an “excellent chance” of pulling off an upset. While POLITICO has previously reported that party insiders believe she has about 60 votes, Dhillon herself would not talk numbers.

She did, however, offer an explanation for why so few members have publicly endorsed her. Some committed to McDaniel before she entered the race and “don’t want to offend her,” she said, while others are running for leadership posts of their own and don’t want to alienate the incumbent and her supporters. And some, she suggested, fear their state party’s finances could be affected if they cross the sitting chair.

In a late bid to lower the race’s temperature, Dhillon vowed if elected to work with Republicans she has clashed with — including elected officials, such as Senate Republican Leader Mitch McConnell, whom she has attacked at times, and even McDaniel herself.

“She’s an important leader in the party,” Dhillon said, inviting McDaniel to stay on in a leadership role. “She has a lot of skills and I’m sure she has things that could teach me.”