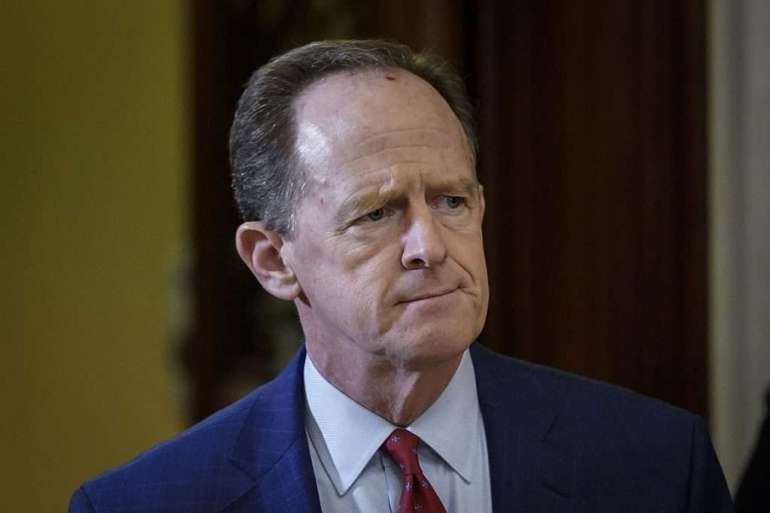 “We keep trying. We’re trying, but this is a new thing,” Schumer told reporters after the call. “This is the kind of thing that should have a strong legislative discussions.”

Both sides had been dug in all day, even as they vowed to move swiftly on a major coronavirus relief package. Senate Majority Leader Mitch McConnell (R-Ky.) told members on a GOP call earlier Saturday that the caucus would stand by Toomey.

At stake is a nearly $900 billion rescue package that includes direct stimulus checks to Americans, increased weekly unemployment benefits, as well as funding for vaccines and schools.

Toomey appeared optimistic after meeting in Schumer’s office Saturday, telling reporters: “I think that we should be able to get a deal done.”

With a Sunday government shutdown deadline, congressional leaders are still aiming to reach an agreement, teeing up a frenzied day of voting in both chambers on Sunday. Top lawmakers are planning to combine the relief package with a $1.4 trillion omnibus to fund the government. If a deal does come together, it’ll only be at the very last minute.

“It won’t be tonight,” said Senate Minority Whip Dick Durbin (D-Ill.). “We’ve got one vote and then we’re leaving, come back tomorrow at 1.”

As the hours ticked down Saturday with party leaders continuing to publicly bicker, some senior lawmakers were already predicting the negotiations could slip into next week, potentially necessitating another stopgap funding bill to keep the government open in the meantime. Lawmakers have been warned they could be voting right up until — and possibly past — Christmas.

“I’m hoping if they can announce a deal today, it can be written up and voted on — best case scenario would be sometime tomorrow. But more likely, probably Monday,” said Senate Majority Whip John Thune (R-S.D.).

Toomey’s language would wind down the Fed’s emergency lending programs established by Congress in March, aligning with Treasury Secretary Steven Mnuchin’s plans to cut off the programs. But Toomey also seeks to prevent the president next year from establishing similar programs, which Democrats say would tie Biden’s hands during a time of economic uncertainty.

On Saturday’s GOP caucus call, Sen. Tom Cotton (R-Ark.) praised McConnell, Toomey and Mnuchin for sticking to their position and stressed that the proposal isn’t a broad rewrite of the Federal Reserve’s authorities, according to sources briefed on the call. He suggested that Democrats either don’t understand the provision or are lying.

While most Senate Republicans backed Toomey, Sen. Mitt Romney (R-Utah), expressed some reservations and said Republicans might be “paranoid” about what Democrats would do with the lending authority, according to a source familiar with the call.

“I think the Fed should be returned to the powers it had prior to the CARES Act,” Romney told reporters Saturday. “But I think other reforms should wait for another time.”

Speaker Nancy Pelosi (D-Calif.) informed her caucus on a call early Saturday afternoon that the Fed issue is the biggest point of contention, which has also been reiterated by Schumer.

“It’s a way to say to Joe Biden, we are tying up our hands, no matter what comes down the pike,” Pelosi said of the Toomey language, per sources on call.

McConnell issued his own warning earlier in the day that talks could drag out for longer if the two sides couldn’t come together.

“There’s a kind of gravitational pull here in Congress. Unless we are careful any major negotiation can slide into an unending catalogue of disagreements,” McConnell said. “Let’s guard against that.”

If and when an accord is reached, House and Senate leaders will need to move quickly — with virtually no room for dissent within their parties — to muscle through the massive package before government funding expires midnight Sunday.

Both chambers cleared a two-day stopgap funding bill Friday night, buying more time for a deal that has remained elusive for months. With no deal in hand by Friday night, House Majority Leader Steny Hoyer told members that the House would not vote until 1 p.m. on Sunday, at the earliest.

Pressure, meanwhile, is mounting on leaders of both parties as the U.S. again surpasses its daily record of new cases and deaths continue to surge.

Members of both parties expressed deep frustration with Congress on Saturday afternoon, blaming the other side for stalling and delaying much-needed aid.

“If Mitch McConnell wants to leave Americans suffering for a totally irrelevant provision to try to cripple our ability to deal with an upcoming [recession] that’s his choice and he’s going to have to live with it,” said Sen. Angus King (I-Maine).

“It’s not some esoteric quibble. And it’s not just Pat Toomey,” Kennedy said. “This is now the Republican position.”

The eventual package — merging both government funding and stimulus measures — will be one of the biggest legislative packages of the 116th Congress. The final bill is also expected to include a slew of year-end tax and health extenders, as well as long-awaited legislation to address “surprise” medical bills.