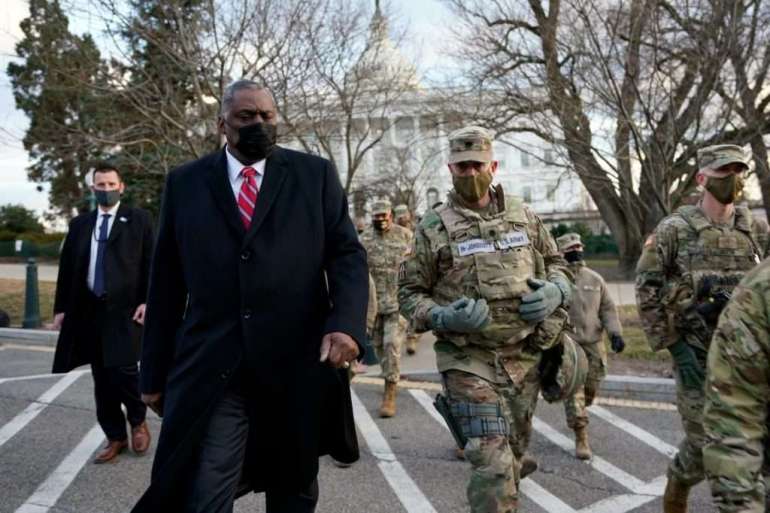 “There has to be a balance,” top Pentagon spokesperson John Kirby told POLITICO, pointing out that Austin did not minimize the advisory role the generals play. “It’s not about swinging the rudder over all the way to the other extreme. What the secretary wants to achieve is a balanced approach to the development of the advice that he has to give the commander in chief.”

This story is based on interviews with 10 current and former defense officials, some of whom spoke on condition of anonymity to discuss a sensitive topic. Many expressed deep concern that Austin — himself a former general — might not push back forcefully enough against the military officers they say have in recent years exerted far too much power. Yet others, who acknowledge that Austin has much work ahead of him, say the new defense secretary is off to a good start.

“Austin is inheriting a civil-military balance inside the building with a joint staff that is perhaps more powerful than it should be,” said Peter Feaver, a professor at Duke University and expert in civil-military relations. “Austin has to teach his team what best practices are and what are the norms … they can’t be smug.”

Austin, who retired as the four-star general overseeing U.S. forces in the Middle East just five years ago, takes the reins of the Pentagon as it reels from its worst crisis of trust in decades. In recent months, top generals have filled the void left by a succession of civilian defense secretaries who fell out of favor with President Donald Trump, putting those military leaders in the uncomfortable position of beating back notions that the former president might — or even could — deploy the military to hold onto power.

And now, the Pentagon is working to tackle extremism in the ranks, after multiple active-duty troops participated in a Jan. 6 insurrection at the U.S. Capitol by a mob of pro-Trump supporters protesting what they believed was a stolen election.

There is a sense among the civilian staff that the joint staff has increasingly cut civilian leaders out of the decision-making process. At times they slowed certain proposals so they never reached the defense secretary; at others they refused to let civilians in on operational details.

“The way the system is working now is that the civilians in the department need to fight to get access to information, and they need to be lucky and know what questions to ask,” said one former senior defense official. “The default should be that without being asked the military and the joint staff are 100 percent open and transparent with their civilian counterparts.”

“Civilian oversight of the military is not only a widely accepted principle in the uniformed military, it’s the law,” he said.

But lawmakers and experts alike contend that the Pentagon’s policymaking process has broken down. In fact, the authors of a 2018 congressionally-mandated review of the National Defense Strategy — including Kathleen Hicks, Biden’s nominee to be Austin’s deputy — were so concerned that they highlighted “a troubling sense that civilian voices were relatively muted on issues at the center of U.S. defense and national security policy, undermining the concept of civilian control.”

Biden’s appointment of Austin raised alarms among lawmakers and experts who were concerned that choosing a former general to run the Pentagon would make the leadership problem worse. After all, Austin would be the second defense secretary in just four years to need a waiver from Congress because he hadn’t been out of the service long enough.

The insurrection at the Capitol helped convince reluctant lawmakers that Austin was the right pick, creating the crisis atmosphere that made “a man on horseback” — in other words, someone with military experience — look more appealing, Feaver said. Austin was confirmed with bipartisan support in the Senate, but he still needs to convince doubters that he will work to strengthen the civilian voice in the Pentagon.

Just two weeks into the job, Austin has made initial strides in righting the ship, experts contend. The former general committed in his confirmation hearing before Congress to surround himself with and empower capable civilian leaders and “rebalance” collaboration and coordination between the joint staff and the civilian staff “to ensure civilian input is integrated at every level of the process.”

“The safety and security of our democracy demands competent civilian control of our armed forces, the subordination of military power to the civil,” Austin said.

Those civilian leaders include Hicks; Kelly Magsamen, his chief of staff; and Colin Kahl, the nominee to be the Pentagon’s policy chief — all widely respected and experienced national security experts. Austin also immediately installed Ely Ratner, a well-known Asia expert, to be his special adviser on China issues, and Max Rose, a former U.S. Representative and National Guard member, to lead the department’s Covid response.

“It’s not insignificant that we’ve already identified two of the top civilians nominated, both of whom have extensive policy experience in Washington and in this building in particular,” Kirby said. “Both of them have established networks of relationships with both civilian and military leaders here, and I think that that sent a very strong message.”

Magsamen has already begun establishing new procedures designed to reinsert civilians back into the discussion. For example, she inaugurated a new morning meeting convening the senior civilian policy leaders and designated military officers representing the chiefs of each of the armed services.

Austin has also favored civilians over military retirees in staffing up his inner circle, bringing on only a handful of people who served on active duty.

By contrast, when former Defense Secretary Jim Mattis took office he chose a retired two-star Navy admiral, Kevin Sweeney, to be his chief of staff, and a serving flag officer, Rear Adm. Craig Faller, to be his top uniformed adviser — both of whom worked for Mattis during his time as commander of U.S. Central Command. Together, Sweeney and Faller tightly controlled the policymaking process, eventually squeezing out Sally Donnelly, Mattis’ top civilian adviser. Mattis also leaned heavily on then-Joint Chiefs of Staff Gen. Joe Dunford, another former Marine.

Austin’s policy priorities, too, signal a step in the right direction, Feaver said. Austin immediately aligned himself with his commander in chief by making the coronavirus response his top priority. On Friday, he approved FEMA’s request for more than 1,000 active-duty troops to support vaccination sites across the country.

Austin took another important step last week in announcing a “stand down” over the next 60 days for units to discuss extremism in the military, Feaver said.

“One of the gravest crises he could have was if the public came to believe that the military was an unreliable defender of the Constitution. That would be a very serious civil-military crisis,” said Feaver. “Getting that under control and addressed in a sober way without being alarmist is an urgent priority for him.”

But the civil-military problem that Austin is inheriting at the Pentagon runs deep. While the policymaking process is designed to be driven by the civilian-led policy shop, the balance of power has skewed to the joint staff in recent years in part because Trump failed to recruit strong civilian leaders and left many senior positions vacant or filled by temporary officials without the authority of Senate confirmation, Feaver said.

Experts believe the steady erosion of the Pentagon’s civilian workforce meant that tasks that are normally the purview of civilian policymakers began to fall to the joint staff, first under Dunford and then under his replacement, Gen. Mark Milley, said Kathleen McInnis, an analyst at the Congressional Research Service who testified before Congress on civil-military relations during Austin’s confirmation process. The senior civilians who were in place were frustrated because they felt they lacked influence with the secretary. And in the final year of the administration, the White House purged civilians in key leadership roles who it deemed not loyal enough to the president and replaced them with Trump allies.

“A preponderance of evidence suggests that over the past decade, OSD’s ability to perform that mission has been degraded due to headquarters reductions, budget cuts, furloughs, and the failure to appoint and confirm civilian leaders,” McInnis said. “As a result, tasks and issues migrated to the joint staff.”

Trump himself set a problematic example, Feaver said. He leaned heavily on Milley, rather than the Pentagon’s civilian leadership, to validate his agenda. As protests against police brutality and racial injustice swept the country this summer, Trump put Milley in charge of a “command center” to respond to the unrest, despite the fact that by law Milley holds no command authority.

“On issue after issue [Trump] violated taboo, he broke a norm and sort of gleefully flouted them — a real tin ear in some ways for what makes for healthy or harmonious civil-mil relations,” he said. “Good order and discipline is the opposite of what was the mantra of the Trump administration.”

Most recently, the civilian leaders who were installed in the last months of the Trump administration discovered that the Joint Chiefs had created new security measures for sensitive intelligence and operations. The move was ostensibly designed to mitigate leaks, but the result was that key civilians were cut out of the planning process.

The concern now is that given Austin’s close relationship with the Pentagon’s military leadership, the new defense secretary won’t be able to push back on these kinds of practices — or won’t want to.

Milley, an Army general handpicked by Trump to be his top military adviser, is under a microscope on how he handles the relationship with Austin. He caused an outcry from retired military officials and experts alike after he walked behind Trump across Lafayette Square last summer after authorities forcefully cleared the area of protesters, and later apologized.

But Austin and Milley have a “good working relationship,” Kirby stressed, and so far there has been “no issue” with the power balance between the joint staff and the civilian leadership.

“He has full faith, trust and confidence in Gen. Milley,” Kirby said.

Feaver defended Milley’s handling of the Lafayette Square incident and applauded his frequent statements in the months since that the U.S. military would play no role in the presidential election, even as Trump continued to politicize the troops.

Milley’s stance on politics was a major contrast with Trump’s last Pentagon chief, acting Defense Secretary Chris Miller, who said the troops didn’t need to be told to stay out of politics.

Milley has “really been politically sure-footed at a time when the boat was rocking more than certainly since [Douglas] MacArthur’s firing but maybe even since the Civil War, in terms of the pressure on the senior military,” Feaver said. Austin and Milley “are likely to be an effective team.”

Still, Austin must insist that the civilian leadership is always in the room when the defense secretary is engaging the brass on policy matters, and that they review proposals from the joint staff before they reach him, Feaver said. If this does not happen, Austin should reject the plans and direct the brass to redo them involving the appropriate civilians.

He stressed that he does not believe the brass will resist the effort to restore civilian oversight, noting that the military recognizes that the last few years, particularly the last months of the Trump administration “were not normal and not healthy.”

But Feaver said to expect bumps along the way to restoring a healthy civil-military balance, and predicted that at some point the Biden appointees would get “crosswise” with the brass.

“Civil-military relations are like a marriage with each spouse bringing into the relationship different expectations of how each one’s roles will be performed and how things will go down,” he said. “Even in healthy marriages, it takes some sorting out to get the expectations rightly aligned.”