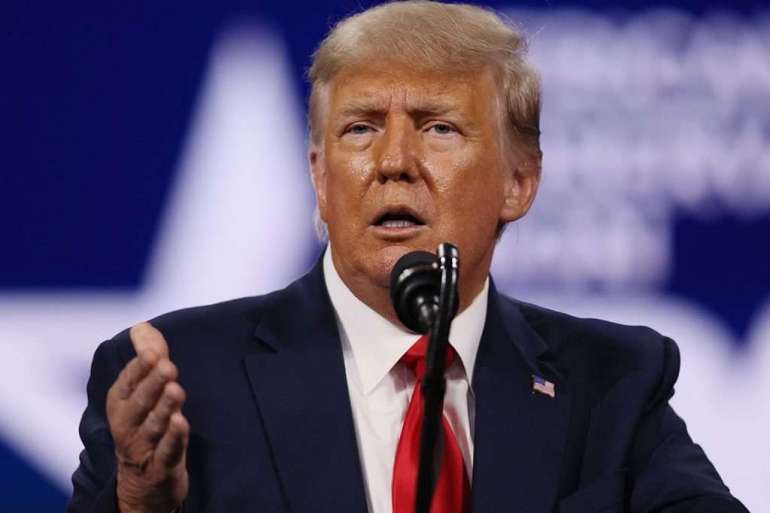 The offensive underscores Trump’s determination to maintain his hold over the GOP, even out of the White House. By urging givers to route his money through his political vehicle, the former president is attempting to monopolize the Republican Party donor base — and bend the GOP to his will by depriving it of cash.

According to conversations with nearly a dozen Republican officials and strategists inside and outside Trump’s orbit, the former president’s move could have profound implications for the party, which is relying on him to fill its bank account ahead of the 2022 midterm elections. Trump is a fundraising behemoth, laying claim to a massive, activist-minded small-donor base that GOP candidates have spent years tapping into.

It remains unclear how far-reaching the financial impact will be for Republican groups. The RNC, which has the closest connection to Trump of any official party committee, has rejected the cease-and-desist demand, arguing that since Trump is a public figure it has every right to fundraise off his name.

And while the former president has been a cash cow for the party, GOP organizations have found other ways to generate dollars. The party has raised gobs of money through appeals focused on culture war issues that rile the conservative base, such as the uproar over Dr. Seuss books. It has also benefited from six-and-seven figure checks provided by well-heeled donors, many of whom have spurned the ex-president, to super PACs and affiliated nonprofits.

With Democrats in full control of Washington, meanwhile, Republicans insist they will have plenty of ways of motivating financial supporters to open their wallets.

Still, Republican officials concede that Trump’s assault could at least temporarily hamper its ability to raise funds from his legions of small donors, particularly if the former president succeeds in convincing them that GOP leaders aren’t sufficiently loyal to him. Tony Fabrizio, the chief pollster on Trump’s 2020 campaign, recently conducted a survey of more than 1,200 GOP voters which concluded that a majority believed the party should “continue to be led by Trump.”

“This data suggests that any party committee leader that wants to play chicken with Trump very likely would end up as political roadkill,” Fabrizio said.

Trump has been partly driven by anger over what he sees as the party’s defense of Republican incumbents who backed his impeachment, say those who’ve spoken with him. National Republican Senatorial Committee Chair Rick Scott (Fla.) has said he plans to be “very aggressive” in backing sitting lawmakers, including Sen. Lisa Murkowski (R-Alaska), who voted for Trump’s conviction and has drawn his ire. Minnesota Rep. Tom Emmer, the National Republican Congressional Committee head, has said he will not wade into primaries and has cautioned Trump against trying to unseat Republican incumbents.

Broadly speaking, Trump supporters argue, it’s not unreasonable for the ex-president to blanch at the idea that organizations are using him to bolster those who backed his impeachment, even if the incumbents’ moderate records make them strong candidates in battleground states and districts.

It’s him “not wanting folks helping his hard-core opposition using his name. He wants control back. I don’t blame him,” said Brian Ballard, a Florida-based lobbyist and longtime Trump ally.

Others point out that the former president has long been sensitive about others financially capitalizing off him. Trump advisers say he’s concluded that he needed to reset his fundraising relationship with the party, whose ranks included people he felt had taken advantage of him.

Some party officials, however, are convinced the offensive is being at least partly pushed by the advisers surrounding Trump, as opposed to the former president himself. In its letter to Trump attorneys Monday, the RNC noted that we “understand that President Trump reaffirmed to [chair Ronna McDaniel] over the weekend that he approves of the RNC’s current use of his name in fundraising and other materials.”

In his Tuesday evening statement, Trump said his efforts to restrict the use of his name were aimed at “RINOs and fools,” and not “important GOP [c]ommittees,” though he did not specify which groups he deemed “important.”

The flareup represents a rare break between Trump and the RNC, who worked closely together during the 2020 election. Trump and McDaniel are close: The two speak frequently, and the former president’s endorsement of McDaniel to serve a third consecutive term as chair paved the way for her reelection.

Within the party hierarchy, last week’s cease-and-desist letters, which were sent by Trump’s legal team, were met with befuddlement. Incredulous Republican officials spent the weekend trying to figure out how they could be legally barred from using the name of a public figure in donor appeals, which is common practice by both parties.

But it’s not the first time that there’s been tension between Trump and party leaders over fundraising. Top Senate Republican officials complained ahead of the 2020 election that the former president wasn’t doing enough to financially help them. Trump also frustrated party officials by sending out fundraising appeals focused on the January Georgia runoff elections, which directed proceeds toward Trump’s PAC rather than the GOP candidates, who were narrowly defeated.

The current rift has rippled across Trump’s orbit. Donald Trump Jr., the former president’s son and a prolific fundraiser for the party in his own right, hasn’t signed any donor appeals for any of the GOP committees since the Georgia runoffs. (The younger Trump, however, has signed fundraising messages for House Minority Whip Steve Scalise and Missouri Sen. Josh Hawley, both of whom are staunch allies of the ex-president.)

During a Tuesday appearance on Newsmax, McDaniel dismissed talk of tensions with Trump, calling him “the most supportive president of the RNC, I think, in history. The things that he did when I was chair while he was in the White House, and the things he continues to do to support the party — we’ve never seen anything like it.”

Amid the drama, concerns have begun to arise among senior Republicans that donors will be confused about where to direct their checks. Adding to the uncertainty is Trump’s desire to start a super PAC, which may end up competing for dollars with the existing outside groups that are closely aligned with the party’s House and Senate leadership.

There are “very confusing messages” being sent “to the real grassroot activists,” said Scott Reed, the former senior political strategist at the U.S. Chamber of Commerce. “Many are shaking their heads.”

Top Republicans say they are determined to extinguish whatever tensions exist between the former president and the party’s campaign apparatus and stress that they have been working to get Trump focused on defeating Democrats rather than exacting revenge on fellow Republicans. One positive development they point to: Trump’s recent endorsements of a handful of Republican Senate incumbents, which will help inoculate them from potentially bloody primaries.

“The president, working with the House and Senate committees, is going to be invaluable in avoiding primaries, and also helping recruit the best candidate for the states that matter,” said Sen. Lindsey Graham (R-S.C.), a Trump loyalist. “Without President Trump on board, it’s going to be an uphill endeavor.”