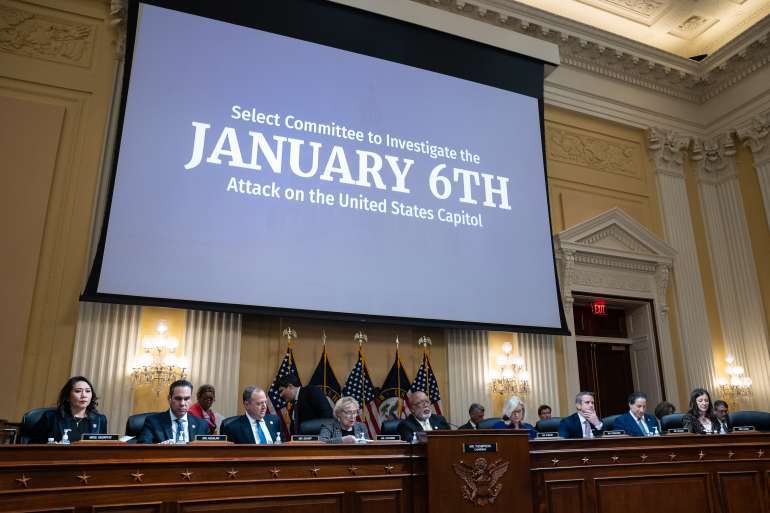 Here are seven takeaways from the final report:

Dozens of select committee witnesses displayed a startling penchant for forgetfulness about one of the most memorable periods of their lives — an attempt by a sitting president who they worked for to subvert a democratically administered election.

For example, Austin Ferrer Piran Basualdo, a Trump West Wing aide, told the select committee that he didn’t remember if he was in the White House on Jan. 6 — or even in his own home.

“Do you remember being at the White House that afternoon, even if you don’t remember where exactly you were in the White House?” Basualdo was asked. “No, I do not,” he replied.

“So you don’t remember whether you were at home or at the White House in the afternoon of January 6th, 2021?” “Again, that day was very blurry.”

In another case, Wayne County, Mich., election official Monica Palmer said she couldn’t remember if Trump raised issues connected to the 2020 election when he called her in mid-November on the eve of a vote to certify the state’s results. And ex-DOJ official Ken Klukowski told the panel he couldn’t recall nearly any aspect of his conversations related to the election, despite numerous phone records and emails documenting his contacts.

“ Select Committee to Investigate the January 6th Attack on the United States Capitol, Informal Interview of Monica Palmer, (Sept. 28, 2021). Palmer told the Select Committee that she could not recall the exact words that President Trump used on the call, and she claimed that she could not even recall whether the President raised issues related to the election.”
(
p.315
)

And the panel has raised questions about testimony from Tony Ornato, the senior Secret Service official who later served as a top aide in Trump’s White House. Ornato told investigators he did not “recall” talking to then-White House colleague Cassidy Hutchinson about a potential Trump visit to the Capitol on Jan. 6, even after being shown text messages with her about it.

“When presented with his text messages with Cassidy Hutchinson in which she referred to an ‘OTR to Capitol,’ Tony Ornato insisted that he didn’t ‘recall ever talking about this with her.’ Select Committee to Investigate the January 6th Attack on the United States Capitol.”
(
p.617
)

The contours of Trump’s effort to subvert the transfer of power were well-known ahead of the select committee’s final report. However, the document adds extraordinary texture and detail to significant elements of his scheme.

For example, it describes Trump’s multiple contacts with RNC Chair Ronna McDaniel to ensure allies were deputizing false electors to cast ballots for him — a central element of his bid to seize a second term. The report also notes that Trump had a 23-minute call with attorney John Eastman on the same day that Eastman began preparing a memo laying out a last-ditch gambit to disrupt the Jan. 6 session of Congress.

“President Trump personally called RNC Chairwoman Ronna Romney McDaniel days before December 14th to enlist the RNC’s assistance in the scheme. President Trump opened the call by introducing McDaniel to John Eastman, who described “the importance of the RNC helping the campaign to gather these contingent electors in case any of the legal challenges that were ongoing changed the results in any of the States.” According to McDaniel, she called President Trump back soon after the call ended, letting him know that she agreed to his request and that some RNC staffers were already assisting.”
(
p.346
)

Eastman, a central figure in Trump’s subversion effort, was also in regular touch during those weeks with two DOJ officials — Jeffrey Clark and Klukowski — who were at the center of a different element of the election-disruption push. The panel obtained phone records from Eastman that helped fill in this element of the story.

One of the select panel’s top recommendations — modernizing a 135-year-old election law that Trump and his allies sought to exploit on Jan. 6 — could soon become law, even if it’s not in the exact form members first proposed. An overhaul of the law borne from a Senate gang’s bipartisan negotiations was included in the year-end government funding legislation that’s soon expected to reach Biden’s desk.

The reforms to the Electoral Count Act would clarify the role of the vice president in counting electoral votes and raise the thresholds for objecting to results, both at the top of the select panel’s recommendations. Other recommendations are less likely to become law with a Republican-controlled House soon sweeping into power, but are still notable congressional markers.

One of the select panel’s recommendations is for Congress to devise a way for Trump to be barred from holding federal office under Section 3 of the 14th Amendment, which prevents those who “engaged in an insurrection” or gave “aid or comfort” to the enemy from holding office. Another recommendation is for the House to overhaul its subpoena authority, with the report writers noting the chamber’s authority to “enforce its subpoenas through civil litigation is unclear.”

Select panel members groused throughout the Jan. 6 investigation about resistance to their subpoenas and what they saw as DOJ’s hesitation in prosecuting people who defied them.

— The committee asked James Watkins — operator of far-right message board 8chan/8kun — if he or his son Ron were the secret identity of “Q,” the source of bizarre QAnon conspiracy theories. He said under oath that they are not.

— Former Attorney General Bill Barr described Trump flying into a rage when security forces moved him to a bunker amid civil unrest over the summer of 2020. “We were all fucking losers,” Barr said, describing Trump’s invective.

— Sen. Mike Lee (R-Utah) texted Trump’s then-national security adviser, Robert O’Brien, on the night of Jan. 6 to express shock that Trump attorney Rudy Giuliani had called him — an apparent misdial, as Giuliani was seeking Sen. Tommy Tuberville (R-Ala.) — to ask him to continue attempting to block the transfer of power. “Rudy is walking malpractice,” Lee texted.

— Amid the riot, Sen. Mark Warner (D-Va.) placed an alarming call to then-Deputy FBI Director David Bowdich airing his stunned reaction after 87 senators were permitted to shelter in place in a single room. “This is a mess,” Bowdich recalled Warner exclaiming, saying he ordered the FBI’s Baltimore field office to carefully guard the location. “Protect that room, recognizing you have almost the entire Senate in one room,” Bowdich recalled saying.

“Around this time, Bowdich says that he received a call from Senator Mark Warner, who said ‘[t]his is a mess, and we now have the vast majority of the Senate in one room.’ Bowdich recalls the number being about 87 senators, and that he directed the FBI’s Baltimore team to ‘protect that room, recognizing you have almost the entire Senate in one room.’ Bowdich also directed a SWAT team to Senator Mitch McConnell’s office, in response to a call from McConnell’s staff informing him that rioters were kicking in their door. On arriving, the SWAT team found that McConnell’s staff had reached safety.”
(
p.710
)

The names that don’t appear

A few big names who drew huge public attention during the committee’s probe don’t get much ink in the committee’s final report. Ginni Thomas, the wife of Supreme Court Justice Clarence Thomas, isn’t mentioned at all, despite a long-running drama over her pre-Jan. 6 texts to then-Trump chief of staff Mark Meadows.

The panel made no mention of Ray Epps, a former member of the Oath Keepers who became the subject of conspiracy theories after footage emerged of him on Jan. 5, 2021, urging a crowd to go into the Capitol the next day. The committee interviewed Epps to help debunk those conspiracy theories and issued a rare statement about his testimony in the midst of their probe.

The testimony of Robin Vos, the Republican speaker of the Wisconsin State Assembly, also isn’t mentioned in the report — though his name surfaces in a laundry list of state legislative leaders listed as “TARGETS” in a document given to the committee by Giuliani. The select panel interviewed Vos at the end of November and said his testimony marked the end of their investigative phase.

The select committee has lived in perpetual concern about having its final product likened to Special Counsel Robert Mueller’s report on Russian meddling in the 2016 election, a massive investigation whose significant findings were obscured by a bone-dry presentation. Until this month, the committee dodged that comparison and exceeded expectations by gripping the public’s attention with extraordinary details and facts — often straight from Trump aides’ mouths.

The select panel’s much-anticipated summertime public hearings were the exclamation point on that effort.

But the panel’s haphazard rollout of its final report this week cut against that trajectory. Amid staff departures and competing news events, its abrupt 9:46 p.m. Thursday release — with virtually no advance warning and no guide or index to easily pinpoint new findings in the 845-page tome — was a discordant final act for a panel that had treaded so methodically.

The committee didn’t offer any easy way to identify new information that was unique to the report, as opposed to simply a recap of previously unveiled select panel evidence or citations to public documents and news reports. One clear indication of a rushed release: The cover of the report included placeholders for the date and report number.

There’s still time, incredibly, for the panel to make even more of an impact. Hundreds of transcripts undergirding its evidence have yet to be released, and a website being developed to house the committee’s report is not yet live.

The tight writing and extensive primary source citations of the final report ensure it will remain an important historical document — but the committee’s release of the raw transcripts of witness interviews has so far generated more significant new details than the document itself.

The select committee’s report shows the depth of its investigation and ability to collect surprising primary source documents. Here’s a sample:

— Extensive productions from the National Archives